Prime 44 West: A Cut Above the Rest

The Greenbrier resort’s premier Prime 44 West steakhouse, honoring famed NBA player Jerry West, opened this past fall. The restaurant’s warm and inviting atmosphere coupled with its cuisine, featuring exceptional cuts of beef from West Virginia and around the globe, will embody comfortable dining at its finest.
Every aspect of the venue – from the décor to the menu – will pay homage to the West Virginia native, commonly known as “Mr. Clutch.” In addition to rich, elegant colors that tie The Greenbrier’s style in with the traditional steakhouse feel, diners will have the opportunity to treat themselves to a meal amid the largest public collection of West memorabilia. West is personally outfitting the restaurant with more than 100 pieces, including the gold medal he won at the 1960 Summer Olympics, All-Star jerseys, mementos from his college days and more.

Prime 44 West focuses on extraordinary ingredients presented in a traditional yet refined manner, including innovative steakhouse favorites. Appetizers include a “raw bar” with Kumamoto Oysters on the half shell with Fresh Wasabi, and Chilled Shellfish Platter with Horseradish Crème Fraiche. Other signature starters like Lobster Bisque garnished with Chestnut and Cardamom and Chesapeake Bay Crab Cake Cigars with a grapefruit and papaya remoulade. Entrées include steakhouse staples with a local twist, including West Virginia Blue Ribbon Pork Duo, Snake River Farm Wagyu Tenderloin, Elysian Fields Double Cut Rack of Lamb and a “Nothing But Net” 44 oz. Porterhouse Steak.

Vernacular Architecture: What is It and What Does It Mean

Vernacular architecture is a term used to categorize architectural design which uses locally available resources and traditions to address local building and design needs. Vernacular architecture tends to evolve over time to reflect the environmental, cultural and historical context in which it exists. R.W. Brunskill, author of Illustrated Handbook of Vernacular Architecture, says that in vernacular architecture, the function of the building would be the dominant factor, while aesthetic considerations, though present to some degree, take the backburner. Local materials are used as a matter of course, with other materials being chosen and imported only as needed.

You will find many fine homes at The Greenbrier Sporting Club that exhibit the pinnacle of vernacular architecture. Below are some of our most popular styles and a quick history of each:

Adirondack and Log
The Adirondack style was born in the late 19th Century on the six million acre Adirondack Park in upstate New York. Its impetus was the discovery of the lake-filled and wooded district’s natural beauty by wealthy Americans in search of a bucolic retreat from daily life. Many of these individuals built substantial houses and in some cases compounds, known to Adirondackers as camps. Large hotels were also constructed, as were smaller cabins for less affluent homeowners. Although the Adirondack style often features log elements, building with timber walls is an American tradition that goes back long before it became fashionable at the turn of the last century. Specific building techniques varied among the different immigrant groups that brought them here in the earliest waves of migration. Factors like local climate, available woods, construction skills and cultural heritages all contributed to the variety found in surviving log buildings. Other than the fact that the exterior walls of a structure are made out of logs, however, there are few architectural features of the Log style that are specifically associated with this type of construction.

Shingle
The Shingle Style flourished in the last decades of the 19th Century, and lay dormant until resurrected by architects in the early 1980s. Its popularity in its original and later phases is closely associated with vacation and retreat homes, since it is frequently employed in the context of seaside resorts and bucolic settings. Summer destinations such as eastern Long Island, Cape Cod, Newport and coastal Maine have among the highest concentration of these kinds of dwellings. Although not a coastal location, the hilly terrain, bucolic setting and recreational nature of The Greenbrier Sporting Club suggest a sympathetic context for houses inspired by aspects of the Shingle Style.

Craftsman
Craftsman houses can ultimately be traced back to the work of two California designers who happened to be brothers – Charles Sumner and Henry Mather Greene. The houses they produced reflect influences from the English Arts and Crafts movement, wooden buildings of the Far East, and their own backgrounds in the manual arts. Following extensive publication of their work, the Craftsman style permeated the country, often by means of pattern books offering plans and details for the construction of modestly sized houses. 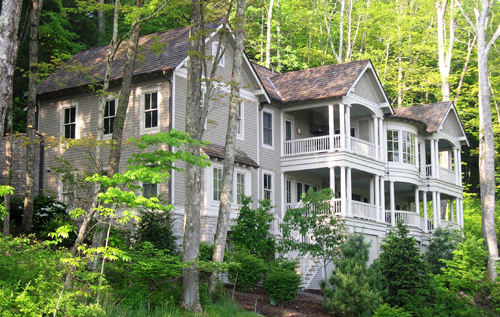 The front page of this morning’s Daily Mail featured The Greenbrier Sporting Club’s spectacular January sales record. With insight from Principal and Broker-in-Charge John Klemish, the article touched on many aspects of why people are buying here at The Sporting Club. 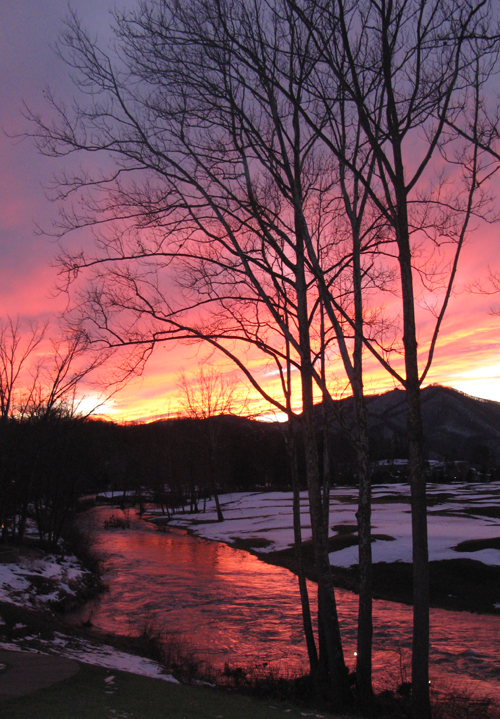 Yann Boutheon, Director of Food and Beverage, snapped some great photos last month of a setting sun over The Snead. As you can see from the photographs, the reds and yellows in this sunset are amazing. Sunsets are probably the most often photographed subject in hobby photography. For starters, they create vivid and active colors and change from minute to minute. What is now a red sunset will be a deep purple sunset in three minutes.

We thought we might share three tips for catching that perfect sunset on your camera this upcoming season…sans Photoshop.

1 – Leave the flash at home and bring a tripod
You want to capture the contrast of the sun’s light against the foreground, or land. Using a flash will only confuse the camera’s light meter. Instead, use a tripod and set your camera on a 2-sec timer, as even the slightest movement of pressing the release button can cause your picture to be blurry when you are leaving your exposure open for anything more than 1/30 of a second. See #2

2 – Use your light meter and bracket your exposure
Nine out of ten digital SLRs now come with an internal light meter. Learn how to use it, as it can be your best friend and take your pictures for “meh” to “wow.” Try “spot” metering different parts of the sunset until the light meter is even. Then shoot the same picture up and down one f-stop. This is known as bracketing. Take your light reading from the sunset itself and not zoomed out, which may include darker foreground images like grass or the mountainside. This can cause your picture to compensate and overexpose, causing the magnificent colors of the sunset to wash out. Also, try different exposure and f-stop combinations. The great thing about digital photography is that if we make a mistake, we can immediately see the result and decide whether or not to delete it or hang it on a wall.

3 – Compose in thirds
Remember the rule of thirds in your photographing of sunrises and sunsets. Our good friend Wikipedia writes that “rule states that an image should be imagined as divided into nine equal parts by two equally-spaced horizontal lines and two equally-spaced vertical lines (a grid), and that important compositional elements should be placed along these lines or their intersections.” While you can always break the rule it’s often a good idea to place elements like the horizon, sun, silhouettes, etc., off center.

Some other tips:
• Use silhouettes as focal points
• Change your White Balance setting to “shade” or “cool”
• Use your manual focus
• Shoot different focal lengths
• Keep shooting – you only get better with practice