The Greenbrier, the classic American destination resort in the foothills of West Virginia’s Allegheny Mountains, announced today that it has appointed Tennis Hall of Famer Pete Sampras as its first-ever Greenbrier Tennis Pro Emeritus.

For the past two years, Pete Sampras has visited The Greenbrier in September to headline The Greenbrier Champions Tennis Classic-alongside fellow American Hall of Famer John McEnroe at the inaugural event in 2012, and again in 2013, when he teamed up with McEnroe to take on the European challengers of former world #1 Ivan Lendl and current tour player Tommy Haas.

With his appointment as The Greenbrier Tennis Pro Emeritus, Sampras-who spent 286 weeks of his professional tennis career ranked as the #1 player in the world, won 14 Grand Slams and 64 singles championships-continues the storied legacy of tennis at The Greenbrier, which dates back to the 1890s when tennis debuted on the lawn in front of the resort’s still-standing Paradise Row cottages. Since then, The Greenbrier has hosted numerous tennis matches and championships, including The Mason and Dixon Championships in the 1920s and 1930s, with winners including Bill Tilden, Francis Hunter, Vincent Richards and Ellsworth Vines. Today, The Greenbrier’s state-of-the-art Tennis Center boasts five Har-Tru outdoor courts with views of the spectacular surrounding Allegheny Mountains, as well as five recently resurfaced Deco-Turf indoor courts and a modern pro shop. 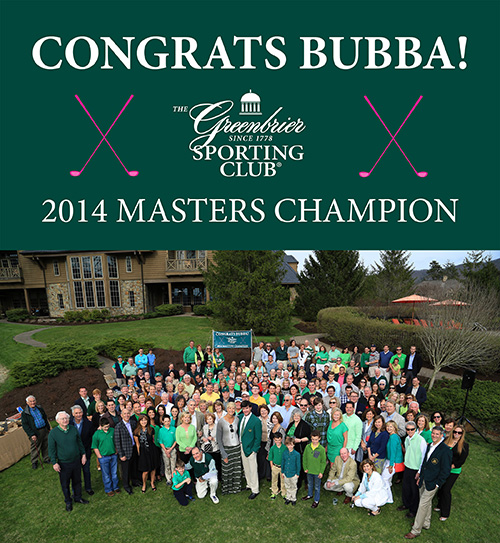 It was a thrilling end to the 2014 Masters for Greenbrier Sporting Club Member Bubba Watson on Sunday, April 13th as he finished 8 under, and slipped on his second Green Jacket at Augusta National. Bubba became the 17th golfer to win multiple Masters Championships, joining a league of legends such as Gary Player, Nick Faldo, former Greenbrier Golf Pro Emeritus,’ Sam Snead and Tom Watson. (Fun Fact: Now both Watsons have 2 Masters wins each: Tom won in 1977 & 1981 – Bubba won in 2012 & 2014.) 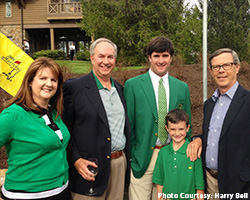 The Bell Family (Harry, Carrie and Derek) along with a family friend, Peter Cribb from Sydney, Australia pose with Bubba.

After a trip to Waffle House, and a “few” media appearances, Bubba and his wife Angie headed up to West Virginia to relax after his momentous victory and to also join their Sporting Club family in celebration. On Friday, April 18th, over 200 Members joined Bubba and Angie for a very special Happy Hour on The Event Lawn. Menu fare included Waffle House inspired Grilled Cheese, Masters Pimento Cheese, and sugar cookies equally inspired by the tournament.

Members also had the opportunity to be one-on-one with the winner, and congratulate him on his historical, and well deserved achievement. 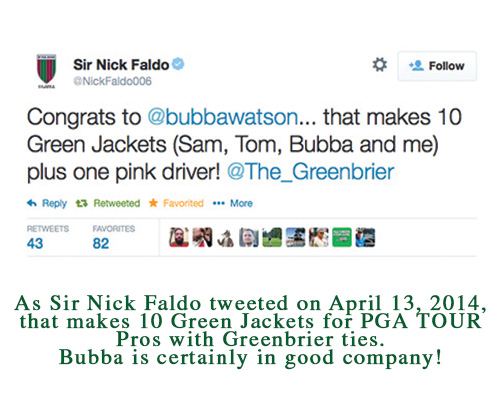 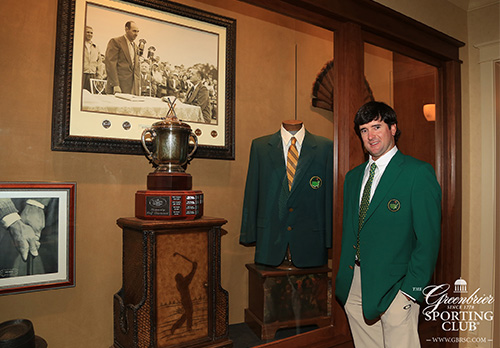 Here is Bubba Watson wearing his Green Jacket, pictured with THE first ever Green Jacket! Sam Snead’s Masters jacket is the only one found outside of Augusta, GA and is part of our Snead memorabilia at The Sporting Club Lodge. We love this photo as it also shows Snead making his remarks after his Masters’ win. 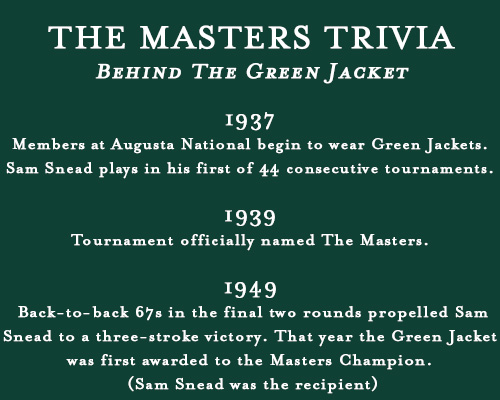