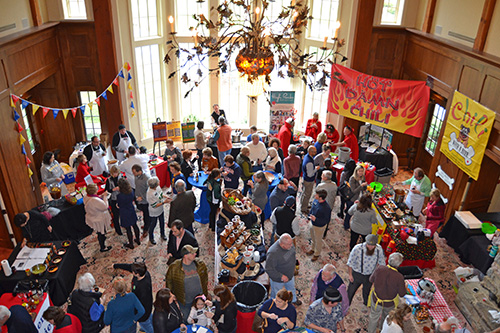 Five teams comprised of members of The Greenbrier Sporting Club and their guests traveled in from near and far for the event held on Saturday, January 16, 2016, as did a regional beer company from Roseland, Virginia, Devils Backbone Brewing Company, along with local Appalachian Soul musicians, Black King Coal.

“It was a great day and a lot of folks joined us to warm up their bellies and their souls!” said Clay Elkins, Director of Food & Beverage at The Greenbrier Sporting Club. “We raised almost $7,000 for local charities and had a great time doing it. What’s best is a lot of the conversations that were started and connections made.”

To participate, each team of members from The Greenbrier Sporting Club picked a charity, devised a theme for their team, and paid an entry fee of $200 per team. The teams competed in two categories, “Best Chili” (“People’s Choice” and “Chef’s Choice” divisions) and “Team Spirit.” In order to win “People’s Choice,” members’ peers were in control of the vote, while the guest chef, Chris Foley, from the Culinary program at Greenbrier West High School, had control over the “Chef’s Choice.” Both divisions for “Best Chili” were rewarded the top three places. 1st place received 25% of the winnings followed by 2nd place with 15% and 3rd place with 10%. The “Team Spirit” award went to the team/charity with the most money provided by their peers as they cast their votes into a mason jar at their team’s booth.

The teams began inside The Greenbrier Sporting Club’s Lodge on Saturday, January 16 at 10am. Cooking took place from 11am (no ingredients were allowed to be pre-cooked for an even cooking field) and tasting began at 2pm.

“The Chili Cook-off boasted dynamite chili and dynamic people,” said Sarah Riley, Executive Director at High Rocks Educational Corporation. “It was a great chance to connect with supporters, new and old, both from the local community and The Sporting Club community. It’s nice to know there are so many people who are supportive of local causes! We’re using our funds to help start a new youth café in downtown Lewisburg for all the young folks of the Greenbrier Valley. Thanks to Clay Elkins and the other great people at The Sporting Club for connecting great local charities with The Club.”

“The Chili Cook-off for Charity is such a wonderful event,” said Katherine Thompson, Executive Director at Child and Youth Advocacy Center “We are so grateful to The Greenbrier Sporting Club, our sponsors, and everyone who donated for their generous support of our work with children and families. Every dollar we receive goes directly to fight child abuse and assist neglect victims in Greenbrier, Monroe, and Pocahontas Counties. Without the support of our community and organizations like the Greenbrier Sporting Club, we couldn’t do what we do.” 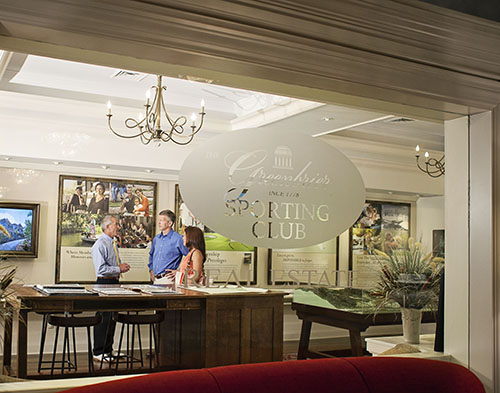 The Greenbrier Sporting Club experienced a stellar year for sales, and finished the year with thirty-two (32) transactions for an overall sales volume of $37,841,000.

AVAILABLE LISTINGS
We currently have ninety-two (92) active listings, consisting of thirty-four (34) homes totaling $76,093,900 and fifty-eight (58) homesites totaling $28,126,200. The average list price for a home is $2,238,056 (unfurnished), while the average list price for a homesite is $484,934. Of the ninety-two (92) active listings, only seven (7) homesites and two (2) homes are owned by The Greenbrier Sporting Club Development Company (developer-owned) and enjoy unprecedented Developer Incentives.

2016 UPDATE
As of March 3, 2016, we have SURPASSED our Founding Partnership goal for Q1, and have eight (8) secured, with 5 additional being finalized. This limited-time opportunity will not last forever, and NOW is the time to join our fantastic community! For more real estate information, please contact our Real Estate Team.