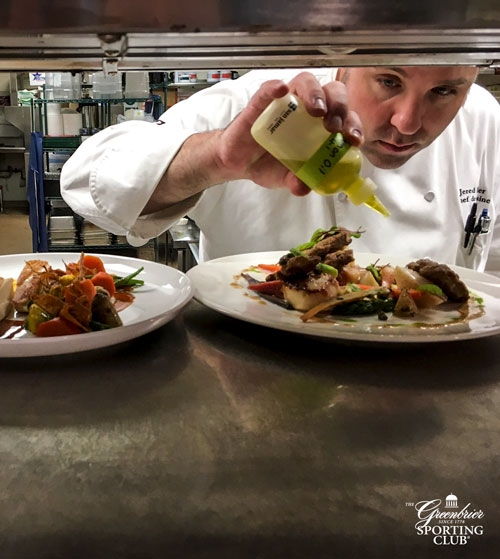 We are pleased and proud to announce the promotion of Jered Miller to Executive Chef at The Greenbrier Sporting Club!

Chef Miller is a native of West Virginia and began his career as a graduate of The Greenbrier’s Culinary Apprenticeship Program before excelling in various positions at the resort. He worked in their Culinary Arts Center – the nation’s first resort cooking school – and for Certified Master Chef, Peter Timmins, as Saucier, Sous Chef, and Chef de Cuisine, as well as with celebrity chefs such as Julia Child and Anne Willan. He also served six years as Restaurant Chef in the The Greenbrier’s Tavern Room, a Forbes/Mobile four-star restaurant, and maintained the four-star status. Five of those years were under Certified Master Chef Richard Rosendale, while he was captain of the U.S. Culinary Olympic Team, and the last year was under Michael Voltaggio of INK restaurant and winner of Top Chef’s season 6. His talents then led him to the Washington Duke Inn and Golf Club in Durham, NC, where he served as Chef de Cuisine before returning to The Greenbrier in 2007 as Sous Chef and chairman of The Greenbrier Culinary Apprenticeship Program.

In April 2011, Chef Miller joined The Sporting Club’s culinary team and has held the positions of Sous Chef and Chef de Cuisine for The Members’ Lodge restaurant. Through his culinary contributions and introduction of a complete charcuterie program, he has elevated the quality of cuisine for our members. His intent is to focus on locally sourced foods and continue to build relationships with the members, local farmers, and community. He hopes to keep the food as true to the Appalachians as possible, while showcasing those things that make West Virginia so very special. His goal is to refine old-fashioned recipes and ingredients not found in other parts of the country into modern-day presentations that still taste like your grandma cooked them. While still providing something for everyone, his goal is to highlight the indigenous flavors unique to Appalachia.

When not at The Sporting Club making people happy, he enjoys wood working, mushroom foraging, and other outdoor activities with his wife, Kimberley, and children: Elizabeth, Madison, and Mason.

We hope you will join us in congratulating Chef Miller on his new role! 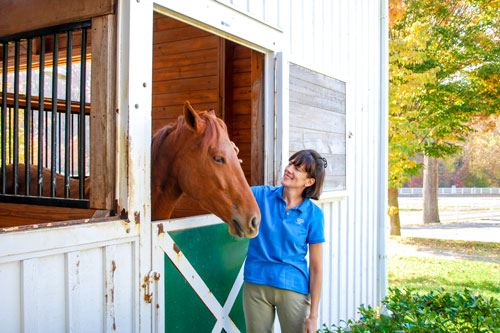 On November 3, 2015, The Sporting Club Equestrian team rescued a horse found in deplorable conditions by Dawn Holliday, Assistant Stable Manager. Dawn discovered Buddy in a makeshift, boarded-up stall in a small garage, with only a small shaft of light through which he could see, neither food nor water, his hair matted thick with filth. “Dawn had brought Buddy to my attention. I saw he was in really bad shape and that we needed to do something about it,” stated Nancy Johnson-Gilmore, Equestrian Manager.

Nancy made an offer to the owner; if he agreed to give the horse to The Greenbrier Sporting Club, authorities would not be contacted. “With my experience as Equine Inspector for the State of Georgia, I’ve found that the vast majority of [people with neglected animals] are ignorant as far as how to take care of a horse. They become overwhelmed and ignore the problem,” explained Nancy. The staff was taken with how sweet and trusting Buddy’s nature was; the only struggle they had, which came as no surprise, was loading him into the trailer for his move to his new home.

After Buddy’s arrival to The Equestrian Center, the task of restoring him to health began. He was covered in his own manure, which took two hours of soaking just to break through the matted hair enough to not damage his skin. Buddy never fought, he “stood there like a real champ,” said Nancy. When finally clean, they could see how very skinny Buddy was. Over the following three months his weight was brought back to normal with a gain of approximately 300 pounds, “You don’t want to overload them; they are sensitive. It’s best to move slowly and consistently,” Nancy clarified. The veterinarian was called in to give Buddy all the basics he never had: vaccinations, deworming, etc., and kept him in his stall for a few days to familiarize him with the surroundings. “We were very impressed with his intelligence and his manner around people,” Nancy continued, “It is quite a testament that he came out of that retaining his trusting nature.”

It is clear these ladies’ hearts were quite impacted by Buddy’s turnaround as they shared memories, “The first time he got to eat grass,” Dawn reflected, “Yes, I think we were all crying,” responded Nancy. “He was in heaven,” Dawn observed. The group shared a video of Buddy running for the first time in The Equestrian Center’s arena. Kelley Adkins, Stable Assistant, who has trained him for three months, was amazed with how easy it was; he is a quick learner, smart.

For now, Kelley is still training Buddy. The plan is to take him up to The Summit in the spring, with other Sporting Club horses, to start him out as a guide horse; this gives him the advantage of gaining experience before taking on novice riders. “Buddy the Rescue Horse” is truly a success story, says Nancy, “Not only was he rescued and brought back to health, but he now has a purpose in life.”