Join Curtis Fleming of Fly Rod Chronicles as he looks back at the 2016 flood and how much progress is being made around Southern WV, including White Sulphur Springs and The Greenbrier. Back in the fall, Curtis and Jacob Ott, Director of Outdoor Pursuits/Naturalist at The Greenbrier Sporting Club, took Wes Phillips out on a local fishing trip. This was Wes’ first time fly fishing and also his first time out fishing since he lost everything in the flood. This episode shows how devastating the flood was, how resilient West Virginia’s are, and how much progress has been made in recovery efforts. 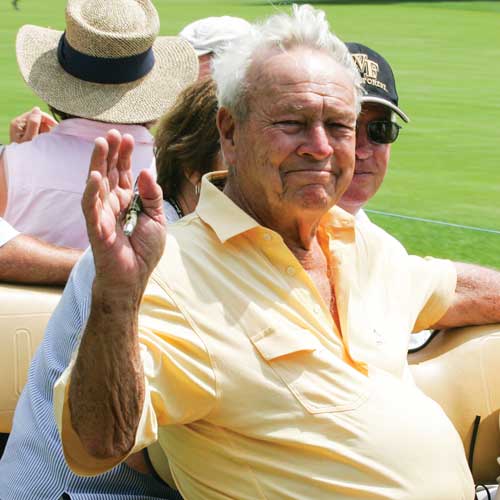 In Fond Memory of Arnold Palmer

In an interview in June of 2015, Arnie reminisced on the beginning of his Greenbrier relationship that coincided with his start on the professional tour. “I have a particular soft spot in my heart for The Greenbrier. Back in 1955, my first year on the Tour, I couldn’t win any official money during my first six months and I was sort of playing on a shoestring. Then, I was invited to play in the Sam Snead Festival, an unofficial pro-am at The Greenbrier. My amateur partner was Spencer Olin, a prominent industrialist and very nice man. We tied for first in the pro-am division and Spencer Olin had bought our team in the Calcutta they had at the tournament. I finished third on the pro side, Mr. Olin gave me a big piece of his winnings from the Calcutta, and I wound up with close to $10,000, which really came in handy at that time.”

Following that first win, he played the festival at The Greenbrier again in 1961, and then here in the 1986 American Express Seniors Tournament. Arnie returned to The Greenbrier in 2010 to cheer on his grandson, Sam Saunders, who played in the inaugural Greenbrier Classic PGA Tour Event. The relationship culminated in 2015 with Arnold Palmer as one of 4 legendary golfers collaborating for the first time to design our newest golf course at The Greenbrier Sporting Club. What a fabulous legacy this legend has left us to carry into our future.

A Tribute to Arnold Palmer

1955: Arnold Palmer on right with AM partner Spencer Olin

2010: Arnold Palmer at the first Greenbrier Classic to watch his grandson compete

2015: One of his last design projects, The Greenbrier Sporting Club’s pending course at Oakhurst 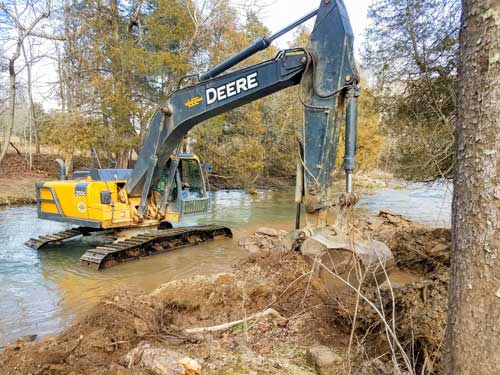 Rehabilitation of watersheds is used to improve the fish habitat that has been damaged due to human activity. Jacob Ott, Director of Outdoor Pursuits/Naturalist at The Greenbrier Sporting Club, has been assisting Trout Unlimited in a rehabilitation project along a portion of Dunlap Creek. According to Jacob, he has spent the past two years working with Trout Unlimited to secure the permits so this landowner could rehab some portions of Dunlap Creek along his property. This stream suffered from a lack of fish habitat due to historical land use practices.

Historical land use practices involved a stream being straightened and widened, which was a common practice and has been used on “just about everything in our area,” according to Jacob.

The project along Dunlap Creek should allow the native brook trout in the tributaries near this property to use the main-stem of Dunlap throughout a longer period of the year. This will also improve the survivability of stocked trout in this area of the stream. The rehabilitation work all falls under Trout Unlimited’s “Upper James River Home Waters Initiative.”

Brook trout, found throughout North America, are known as eastern brook trout in our region. They inhabit rivers, streams, creeks, spring ponds, as well as small and large lakes. Their native range has been drastically reduced in the east due to habitat loss and the introduction of other trout species. They prefer clear waters on a narrow pH that is well oxygenated with high purity.

To read more about this particular project, click here.

Very similar work has been done on the East Fork of the Greenbrier River by Trout Unlimited and WVDNR and USFWS. That project is part of the “Eastern Home Rivers Initiative.”

All of these projects aim to restore, reconnect, and improve the smaller headwater streams in our area. 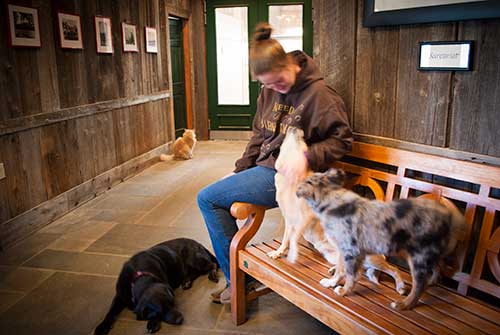 We are thrilled to announce the promotion of Dawn Holliday to Equestrian Manager.

Dawn has been with The Greenbrier Sporting Club since 2004, and brings a great deal of experience with her. That, along with her work ethic and dedication, will ensure her success in this position and the continued success of The Equestrian Center.

Dawn grew up riding horses on her family’s farm in Smoot, West Virginia and is an avid trail rider. She joined The Sporting Club in 2004 as Stable Assistant, but quickly became an integral member of The Equestrian Center team and was promoted to Assistant Equestrian Manager in 2009. During her time with The Sporting Club, Dawn has bred and raised Labrador Retrievers and Australian Cattle Dogs, bringing them to work and sharing their development with our members and guests. A lover of all animals, she has also been involved in horse rescue and has fostered a pig, a herd of goats, numerous cows, and a litter of kittens.

Dawn lives in Frankford with her son Conner, partner Jeremy, and their menagerie of creatures: four horses, seven dogs, and four cats.