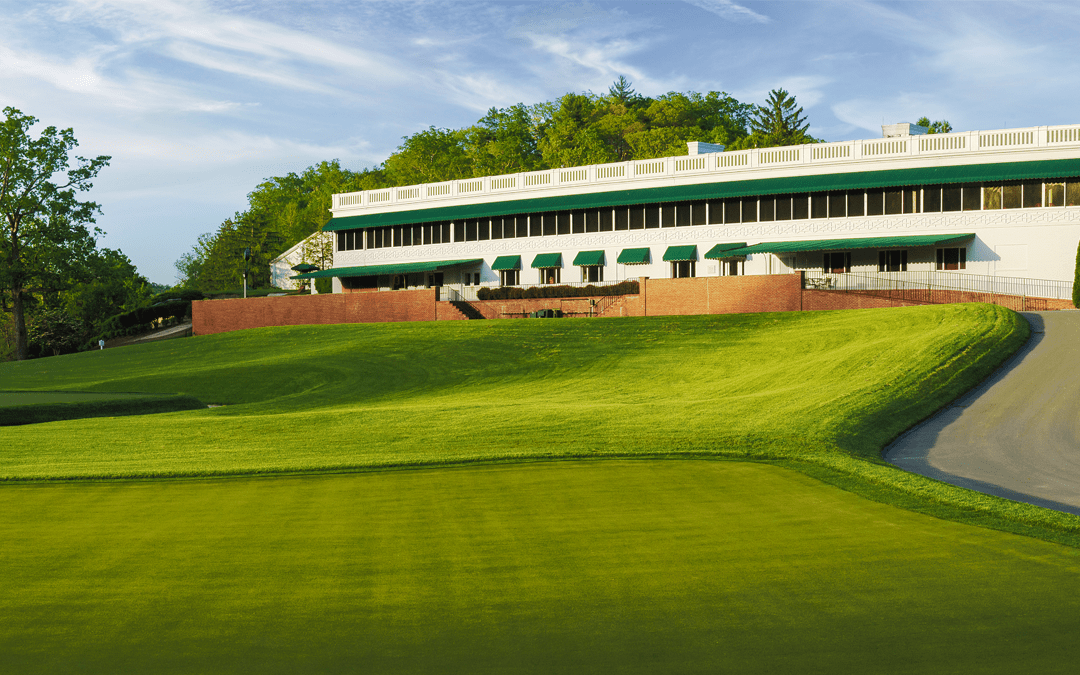 Cam Huffman, Director of Public Relations and Content, The Greenbrier

The 105th season of golf on The Old White TPC Course at The Greenbrier officially began on Friday, March 30, with a special ceremony to mark the historic occasion.

Commencing at 10am, on the iconic first tee, the ceremony included some anecdotes on the course’s storied past from The Greenbrier historian Dr. Robert Conte, as well as a question and answer session. A ceremonial first ball of the season followed Conte’s remarks, before tee times officially began for 2018.

“The Old White TPC has an amazing story to tell, and it is a significant part of golf history in the United States,” said Dr. Jill Justice, President, The Greenbrier. “We’re excited about another year of golf on this treasured classic.”

Originally designed and constructed by Charles Blair Macdonald and Seth Raynor in 1914, The Old White TPC was named for the well-known Old White Hotel, which stood on the resort grounds from 1858 through 1922.

Macdonald, the father of American golf course architecture, modeled several holes from some of the most famous throughout Europe. The 8th Hole was styled after the “Redan” at North Berwick, the 13th after the “Alps” at Prestwick, and the 15th after the “Eden” at St. Andrews. His associate, Seth Raynor, assisted in the course construction and returned in the 1920s to oversee updates to the golf course.

Through the years, the course has played host to legendary golfers like Sam Snead, Ben Hogan, Gary Player, Arnold Palmer, Jack Nicklaus, and Lee Trevino, as well as presidents and celebrities from the world of sports and entertainment.

After sustaining substantial damage from flood waters in June of 2016, forcing the cancellation of The 2016 Greenbrier Classic less than a month later, The Old White TPC reopened in July of 2017 just in time for the tournament, fully restored by noted golf course architect Keith Foster. By fully embracing the original Macdonald/Raynor elements, the course has been overwhelmingly received by PGA TOUR players and guests alike. Golf Digest named The Old White TPC the Best Restoration of 2017. It was also named one of America’s 100 Best Public Courses by that same publication.

The 2018 golf season on The Old White TPC runs from March 30 through November 26 and is closed only for needed maintenance and preparations for The Greenbrier Classic. Sporting Club members do not pay greens fees.

For more information on The Old White TPC or the other exciting golf offerings at America’s Resort – including the recently reconfigured Meadows Course, which is already open for the season – visit Greenbrier.com/Golf.

For information on The Snead – the members’ only golf course at The Greenbrier Sporting Club – visit greenbrierliving.com/amenities/golf. 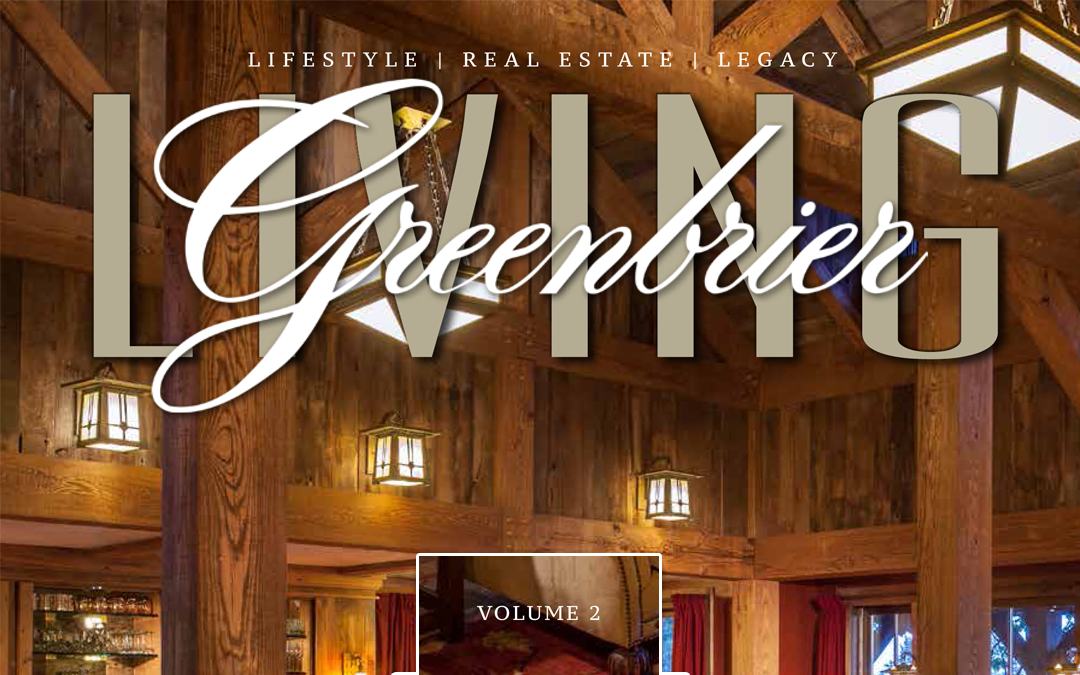 We’re pleased to release the second volume of Greenbrier Living Magazine. It’s filled with seasonal articles, resident interviews and much more. You can download the magazine for free or request a free printed version below. 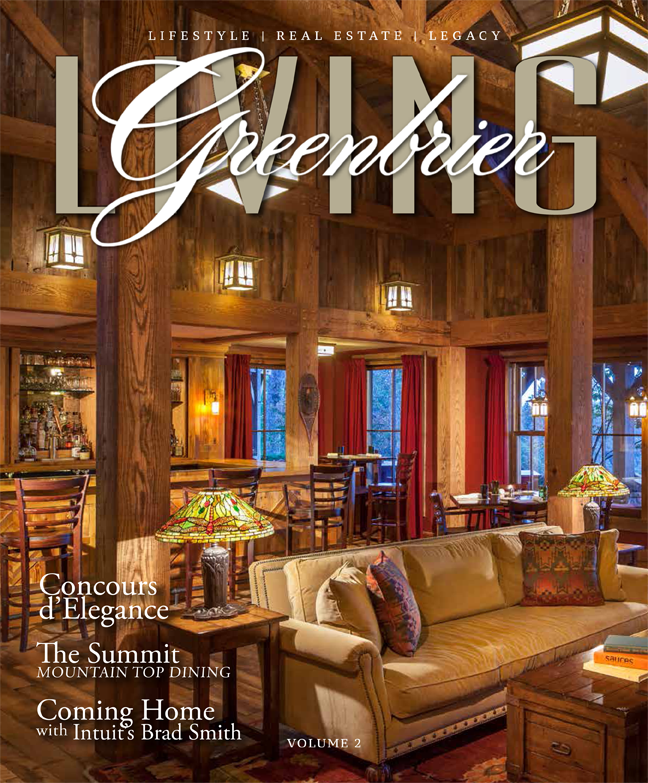 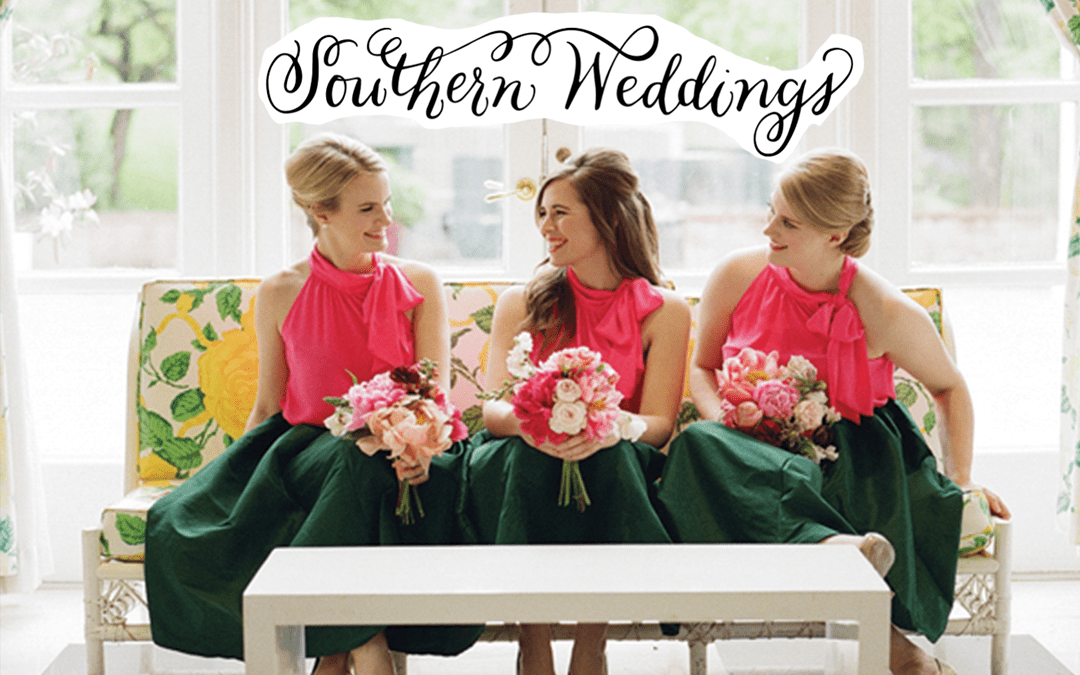 Southern Weddings Inspired by The Greenbrier

Southern Weddings takes readers on a beautiful journey in their article, Colorful Wedding Inspiration at The Greenbrier. From invitations to coral peony bouquets, all influenced by the patterns, architecture, and history of America’s Resort.™

To learn more about weddings at The Greenbrier, click here. 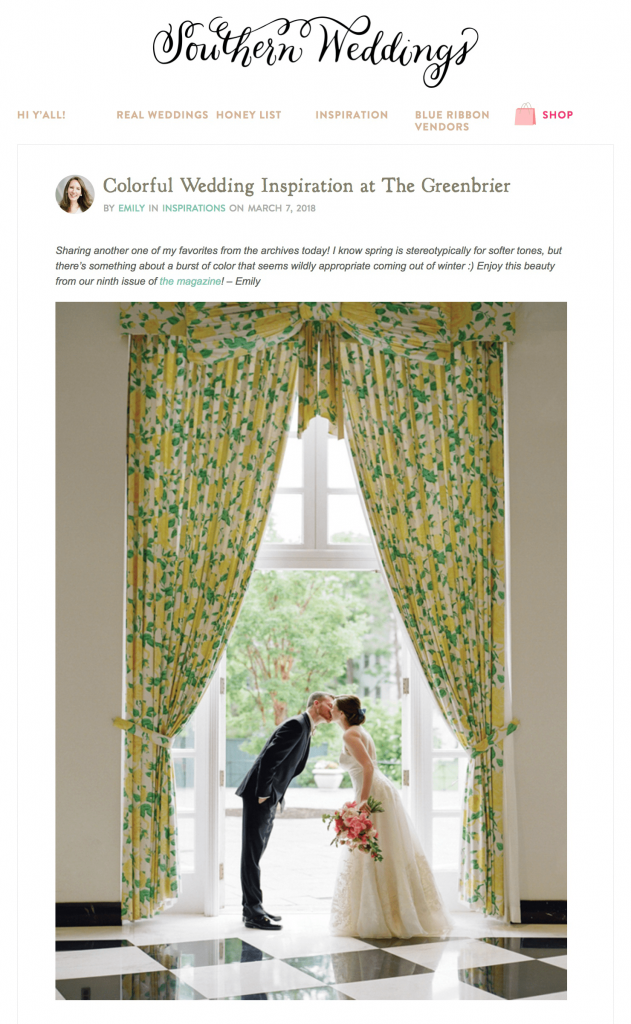 Click the thumbnail to view the article (with images) online

Colorful Wedding Inspiration at The Greenbrier
By Emily

The Greenbrier is one of those places that has always seemed so enchanting to me, so we jumped at the chance to hit the road to West Virginia and create an editorial there for Southern Weddings V9! From the colors and patterns, to the architecture, to the history, to the traditions wrapped up in this incredible property, there was an abundance of inspiration to pull from, and we had a blast meeting up with one of our favorite vendor teams (including Jaclyn Journey, Whitney Neal, and Carley Randall, who all made the trip from Kentucky) to bring this bold and colorful, but refined, shoot to life. Our story was inspired by the many real families who create sweet traditions at the Greenbrier–in this case, a girl whose grandmother takes her there for tea every year on her birthday. When it came time for her wedding, she couldn’t imagine a more meaningful or celebratory place to gather loved ones for a ceremony and reception…and afternoon tea, of course!

We’re so grateful to the fantastic weddings team at The Greenbrier for hosting us so graciously, and to the phenomenal team who helped us bring our Dorothy Draper-esque vision to life!

We were incredibly lucky to work with Momental Designs for this paper suite. Kristy had visited the Greenbrier before, and knew exactly how to translate their incredible patterns and plaster work into paper. She truly knocked it out of the park!

One of my favorite small details from this shoot: our sweet bride’s stylish little teal bow! And of course, that coral charm peony bouquet by Jaclyn Journey gets ALL the heart eyes.

Our bride and groom from this shoot are married in real life! It was so fun to meet West Virginia couple Ashleigh and Pete and work with them on this project.

The Greenbrier is famous for its afternoon tea service (complete with a rendition of the Greenbrier Waltz!), so for this editorial, we opted to replace cocktail hour with afternoon tea! Our bride’s own 93-year-old grandmom joined us for these photos, and she was completely precious!! Pick up your copy of the magazine for more of the backstory here!

Any Bachelorette fans in the house? Emily Maynard made The Greenbrier Love Clock tradition famous, and we had fun indulging in it with our bride and groom, too!

Josh from McComas Video Productions put together the most wonderful behind-the-scenes film from our day at the Greenbrier – it really showcases the iconic property and all that went into this shoot!