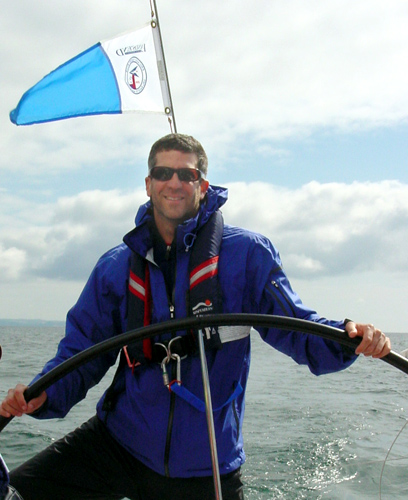 Larry Klein & the 100th Mac Race:
If you were not aware, the 2008 Chicago Yacht Club Race to Mackinac included our very own Larry Klein, General Manager of The Greenbrier Sporting Club. On July 19th he, along with his father, made history by participating in the 100th Race to Mackinac.
Over 4,000 sailors on 437 boats participated in this year’s Race and thanks to Mother Nature it was a very challenging one. While they say that most boats would finish the race between 40 and 60 hours after their start, some boats had to pull out so close to the finish line, including the boat, RevoluTion, skippered by Craig Mielke…the very boat that our fearless crew member Larry help crew. Caught in a narrow waterway at night, battered by some fierce storms, the decision was ultimately made to start the engine and head in safely.
Although Larry’s boat was unable to finish, he thoroughly enjoyed himself…as you can see from the photo (on a much calmer day manning the yacht).
Drop by the Lodge and let Larry regale you with tales from his sailing voyage.