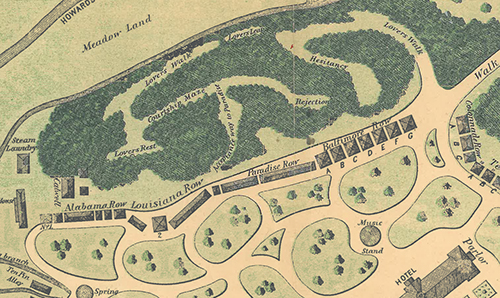 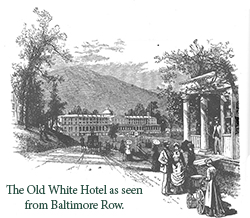 Neighborhood Feature: The History of White Sulphur Hill
In 1858, many changes were on the horizon for our nation. As West Virginia was on the brink of statehood, The Greenbrier, better known then as “The Grand Central Hotel” was changing as well. Recently purchased by a group of prominent, wealthy Virginians, the hotel affectionately known around the nation as its nickname “The Old White”, re-opened its doors to the public. Changes around the property had taken place prior to the grand re-opening, including the construction of new cottages–Virginia Row, Tansas Row, the completion of South Carolina Row, among others. However, a lesser known bit of information may be the system of paths or walkways incorporated into the wooded landscape behind Baltimore and Paradise Row. 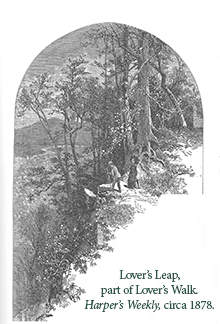 These paths, were known as “Lover’s Walk”, in the area we know today as the White Sulphur Hill neighborhood. Over 150 years before stately homes stood in this neighborhood, the many couples that frequented the resort took leisurely strolls along this path. Veering off first from Lover’s Walk was “Hesitancy Row”, which namesake denotes this was for couples looking to not journey further into a relationship. The path ended abruptly, and as the name suggests, lead to nowhere. If couples chose to continue their trip along “Lover’s Walk” they would encounter “Lover’s Leap” (pictured), a point that overlooks Howard’s Creek and the “Meadow Land”, now part of the Howard’s Creek neighborhood. (It is important to note, that there are no records, according to Greenbrier Archives of anyone actually partaking in this leap.) 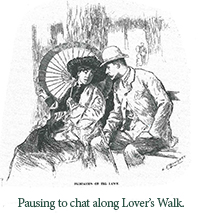 As couples continued on their stroll, they came to a crucial point where the pathway forked called “Courtship Maze”: this is where they must take “Rejection Row” (a name that does not leave much to the imagination) or “Acceptance Way to Paradise”. If couples chose the latter, it led directly to Paradise Row, and seems to confirm this is indeed where couples are said to have spent their honeymoons at the famous White Sulphur Springs.
Today, the White Sulphur Hill neighborhood consists of 29 homesites, with many homes built and a handful of homes and homesites for sale. As many couples begin their legacy by strolling along “Lover’s Walk” at The Grand Central Hotel, you too can be part of the history now at The Greenbrier, America’s Resort. 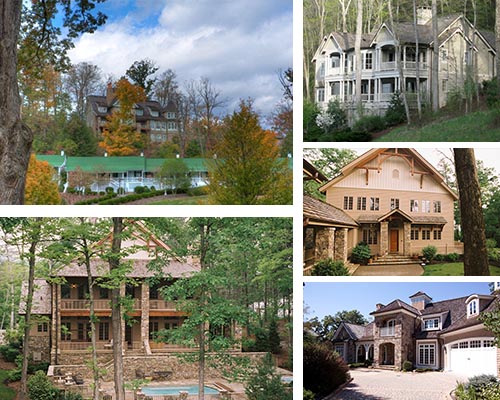