Progress on The Ashford Short Course

Progress on The Ashford Short Course

Opening in the summer of 2018, The Ashford short course will be a collection of holes from revered architects and courses around the world. The newest addition will be focused on great architecture, a relaxed environment, and fun for all who play. The Ashford short course is a 9-hole loop that will be walking only and range from 76 to 112 yards. The relaxed environment of the short course has capabilities for family golf of all ages to learn the game for the first time or hone in on a rusty short game. Of course, it will be available after the round in helping settle friendly wagers or ties from your game of the day. We will also use The Ashford to host events like night golf, closest to the hole, etc. With the close proximity to The Members’ Lodge, it is perfect to walk over if you just don’t have the time to play The Snead course, and we can’t wait for everyone to try it out!

Did you know? In August 1942, the U.S. Army purchased The Greenbrier Hotel in White Sulphur Springs from Chesapeake & Ohio Railway, and began converting it into a military hospital for sick and wounded soldiers and airmen. Named for Army physician Col. Bailey K. Ashford (1873–1934), the new hospital received its first patients in November. Before Ashford General closed in mid-1946, more than 25,000 seriously ill and wounded patients—including many from West Virginia—had received treatment.

Ashford employed 45 doctors, 100 nurses, and 500 enlisted men. Assisting them were 200 WACs (Women’s Army Corps), 35 civilian nurses, 500 civilian employees, and scores of Red Cross volunteers. Seven hundred German prisoners of war maintained the grounds and buildings. Families, friends, and good-hearted people throughout West Virginia came to visit and help the men toward a speedy recovery. The recovering servicemen could use all of the famous resort’s special facilities— swimming pool, golf courses, tennis courts, hiking and biking trails, and so on—and monthly dances with live entertainment were held. Today, few of The Greenbrier’s visitors know of the vital role it played during World War II, but those who were there have vivid recollections of Ashford General Hospital as a Shangri-La for wounded servicemen. 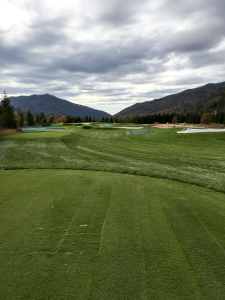 #1. Lions Mouth – Plays to a double green shared with #7.
The green is split by a large ridge that dissects the two holes. A “Lions Mouth” bunker, guarding the front right of the green, guards the green. The Lions Mouth is a concept that Seth Raynor and CB Macdonald used on many of their courses. This hole plays approximately 76 yards.
#2. Double – Plays to another shared green with #6.
The green is again separated by a large ridge running through the center, giving each hole its own defined putting surface, even though they are connected. A long skinny bunker on the front left guards the green. Once on the green, the surface has many subtle breaks. Walter Travis, renowned for his green complexes, inspired the green concept. This hole plays approximately 97 yards.
#3. The Redan
The original Redan hole was built in Scotland at North Berwick. The hole has been duplicated many times by the likes of Seth Raynor, CB Macdonald, Charles Banks, and many others. The Redan allows a player to play on the extreme side of the green, to which the ball will roll to the level part of the putting surface. This hole plays approximately 102 yards. 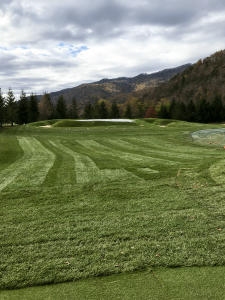 #4. Papa
The 4th hole on Ashford is our rendition of HC ‘’Papa’’ Leeds’ 9th hole at Myopia Hunt Club – some say the most interesting par three in the world. This quirky, but fun, short par three has it all! From the surprise bathtub bunkering (deep and skinny), to the dramatic views once on the green. This hole plays approximately 88 yards.
#5. Punchbowl
A “punchbowl green” is a putting surface that sits inside a hollow or depressed area on a golf hole, so that the putting green appears as a “bowl,” with a flat bottom and sides rising up from that bottom. The bottom is the putting surface, the “sides” of the bowl typically consist of mounding around three sides of the putting surface. The front of a punchbowl green is open to the fairway to allow golf balls to run onto the green, and the fairway often runs down to a punchbowl green. The complex is very accepting to most shots as it will play slightly downhill. This hole plays approximately 85 yards.
#6. Press – Plays to the shared green with #2.
This concept was inspired from a Walter Travis green complex from Kennebunkport, ME.  Mr. Travis thought a player should be able to play most shots around a green with almost any club in his bag.  With the large approach and mounding around this green, a player should be able to use a variety of clubs and imagination if the green was missed. This hole plays approximately 82 yards.
#7. Duel – Plays to a shared green with #1.
Inspired by The Duel Hole, a famous par three designed by A.W. Tillinghast at The San Francisco Golf and Country Club. This famous par three was built on the actual site of a famous duel back in 1859 between Senator David Broderick and Supreme Court Justice David Terry of the Democratic Party. This duel hole has a large potato chip looking putting surface, a concept ‘’Tilly’’ incorporated in many of his designs. This hole plays approximately 93 yards.
In case you were wondering, Supreme Court Justice Terry was on the better end of the duel!
#8. Reverse Redan
Two great concepts in one! The reverse Redan will encourage players to play left of their target and use the slope to get closer to the hole and the more level part of the green. A misplaced shot to the right will have to contend with the deep bathtub bunker! This hole plays approximately 100 yards. 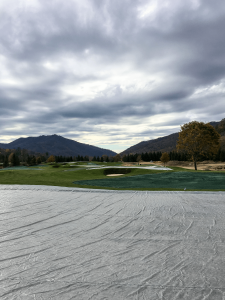 #9. Plateau
This hole plays along Howard’s Creek and to a double shelved putting surface. The green complex features a sloping green from back to front with deep penal bunkers to the left and rear of the green. This hole plays the longest at approximately 112 yards long. 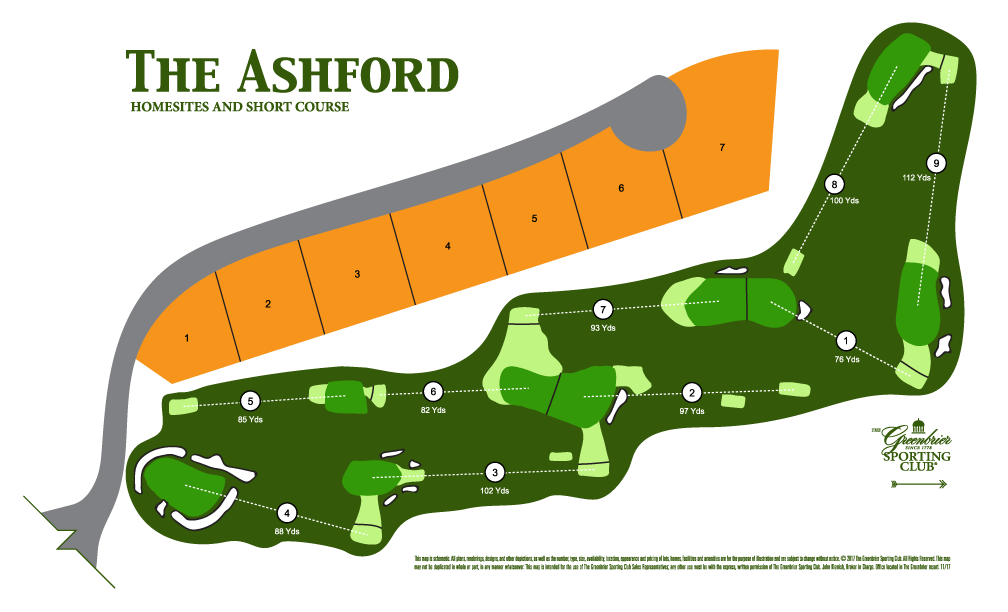