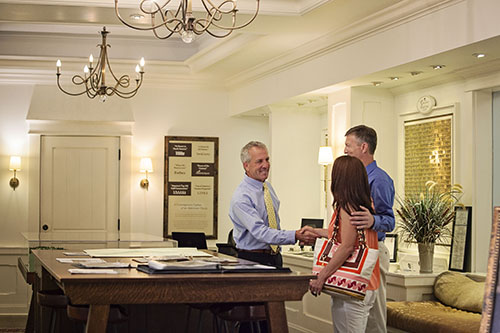 With 2014 behind us, and being well into 2015, the future looks bright in terms of sales at The Greenbrier Sporting Club. 2014 brought over $36 million in total sales volume, putting us 22% ahead of 2013. Existing home sales remained strong at The Club through the end of the year, particularly in the Copeland Hill neighborhood. To date, we are sold out within both Copeland Hill and Old White Cottages on Howard’s Creek neighborhoods.
What we have found as a “trend” in 2014, is that buyers are looking for a place they can call a “home away from home”, according to Greenbrier Sporting Club Associate Broker & Sales Executive, John Weber. “They are also looking for a club to join, with like minded members.” The importance of community is something very high on a client’s list, and The Greenbrier Sporting Club continues to offer that and much more. With 15 neighborhoods to choose from, plus a central hub which is The Members’ Lodge, that sense of community and camaraderie is quickly formed by actively living The Sporting Life. Through backyard gatherings, golf outings, or annual events at The Club, many of our members have built lifelong friendships here. Providing that sense of community is really what The Greenbrier Sporting Club is all about, and is one of the many reasons why we continue to be the most sought after private community in the U.S.
Not only is our community thriving, so is our homesite construction. We are seeing continuous activity, with 11 homes currently under construction and 4 going through the Architectural Review Board (ARB) process. As we look to what 2015 will bring, all signs are pointing to a positive increase in real estate activity, both nationwide and here at The Greenbrier. According to Realtor Magazine, “it is expected that solid growth will occur in 2015, keeping home sales on an upward path.” In fact, The National Association of Realtors (NAR) forecasts “existing-home sales will reach 5.3 million, an increase of almost half a million over 2014.”
It is likely that the expected return of more “sensible” mortgage underwriting standards will contribute to increase in sales for 2015. This change put in place by lenders will help steady the interest rates, with suggestions that it will hover below 5% for most of 2015 according to the Homebuying Institute. If in fact these interest rates “defy expectations and remain close to where they are currently, this will be another boost to housing sales” says NAR Chief Economist Lawrence Yun.
*A reminder that this is simply an educated guess, and in no way is this an exact prediction as to what the results the market will produce this year, or in following years.
Sources: Realtormag.org & Homebuyinginstitute.com