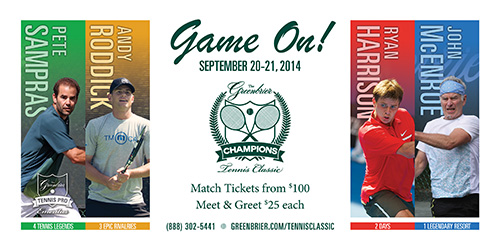 OFFICIAL PRESS RELEASE: White Sulphur Springs, WV – July 7, 2014:
The Greenbrier, the classic American resort in the foothills of West Virginia’s Allegheny Mountains, has announced that rising pro tennis star Ryan Harrison will replace Tommy Haas, who has had to withdraw due to a recent shoulder injury, in the roster for this year’s Greenbrier Champions Tennis Classic, September 20-21, 2014.
The third annual exhibition tournament will feature Tennis Hall of Fame legends Pete Sampras and John McEnroe, who will compete for their third straight year, alongside Harrison and US Open champion Andy Roddick, in their inaugural matches at The Greenbrier Tennis Center.
The 2014 Greenbrier Champions Tennis Classic will kick off on Saturday, September 20th with two marquee singles matches, pitting The Greenbrier’s new Tennis Pro Emeritus, Pete Sampras, against tennis legend John McEnroe, and the up-and-comer Ryan Harrison against retired former world #1, Andy Roddick. The tournament will culminate on Sunday, September 21st with a doubles exhibition match, pairing McEnroe and Sampras against Harrison and Roddick.
“I am really excited to join American tennis legends Sampras, McEnroe and Roddick at this year’s Greenbrier Champions Tennis Classic!” says Harrison. “Having the opportunity to play against some of my tennis idols will be a tremendous highlight in my career.”

ABOUT PETE SAMPRAS:
Pete Sampras joined the professional tour at the age of 16 in 1988 and won his first pro tournament on February 12, 1990 in Philadelphia. In 1990, he won his first US Open, becoming the youngest champion at the age of 19 years and 28 days. He reached the No. 1 ranking for the first time in his career on April 12, 1993. Pete went on to win 14 Grand Slam titles (including five US Open and seven Wimbledon singles titles) and held the year-end No. 1 world ranking for a record six consecutive years (from 1993 through 1998). In the last official tennis match of his illustrious career, Sampras defeated rival Andre Agassi in the final of the 2002 US Open. Pete was then inducted into the International Tennis Hall of Fame in July 2007 and in April 2014 was appointed The Greenbrier’s first-ever Tennis Pro Emeritus.
ABOUT JOHN MCENROE:
John McEnroe is an American tennis legend. As an 18 year old, in 1977, McEnroe reached the semifinals of Wimbledon and then in 1978 he led the United States team to their first Davis Cup Championship in five years. During that same year McEnroe turned professional and in 1984 he achieved the best single year winning percentage on the ATP professional tour (winning 13 of 15 tournaments and an 82-3 record for the year-a record that still stands today). John won seven Grand Slam singles titles (4 US Opens and 3 Wimbledon singles titles), was part of five US Davis Cup championship teams, and held the No 1 world singles ranking for four straight years between 1981-1984. John also is considered to be one of the greatest doubles players of all time having won nine Grand Slam men’s doubles titles and holding the No. 1 ranking in men’s doubles for a record 257 weeks. He was inducted into the International Tennis Hall of Fame in 1999, taking his place among the immortals of the sport. John has established himself as the world’s most renowned tennis commentator and analyst, working for ESPN, NBC, CBS, and the BBC at the Grand Slam tournaments. When John is not traveling the world on business, he spends his time working with kids at his New York City John McEnroe Tennis Academy, located at Randall’s Island.
ABOUT ANDY RODDICK:
Andy Roddick is a retired champion tennis player who, in 1999-2000, was the No. 1 Junior in the US, and by 2000, had cracked the World rankings at No. 1. He went on to win six world junior singles titles, and seven world doubles titles. In 2000, Andy also won the Junior US Open, and Australian Open singles titles. That same year, Andy went pro. By 2003, Andy had captured the US Open title, won his first-ever Grand Slam single title, and was ranked No. 1 in the world. Also in 2003, Roddick became the youngest-ever ATP Player of the Year. For much of the next decade, Andy was ranked in the top 10. Andy reached the Wimbledon finals three times in his career, and the Australian Open semi-finals four times. Andy played in 43 Davis Cup matches, and in 2007 led the United States to victory at Portland, Oregon. In 2012, 30-year-old Roddick announced his retirement.
ABOUT RYAN HARRISON:
Ryan Harrison, the son of a tennis coach, is a 22-year-old all-court player whose serve and forehand are his strengths. Harrison, who began playing tennis at the age of two and turned pro in 2007, reached a career-high No. 7 in world junior ranking in April 2008 and in that same year advanced to semi-finals at the Australian Open juniors. In July 2011, Harrison won his first ATP doubles title on the grass of Newport, R.I., partnering Matthew Edden. Harrison reached successive ATP singles semifinals in Atlanta and Los Angeles, becoming the first American teenager since Andy Roddick in 2002 to reach back-to-back ATP semifinals. In February, 2012, Harrison made his Davis Cup debut winning a dead rubber in the USA’s sweep of a Roger Federer-led Swiss squad. Harrison has trained at the John Newcombe Tennis Academy in New Braunfels, Texas and the IMG Tennis Academy in Bradenton, Florida.