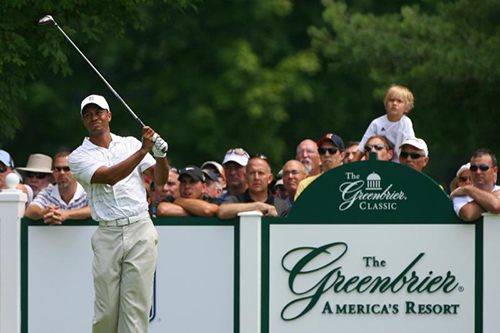 The Greenbrier Classic will take place from June 29 – July 5, 2015 at The Greenbrier, the classic American resort in White Sulphur Springs, WV.
Woods, 39, will be making his second appearance at The Greenbrier Classic. Since turning professional in 1996 he has amassed 79 PGA TOUR victories, second all-time behind Sam Snead, former pro-emeritus at The Greenbrier resort, who recorded 82 titles. Woods’ record includes 14 professional major championships and the 2007 and 2009 FedExCup titles. He is one of only five players in the history of the game to win a career Grand Slam, joining Jack Nicklaus, Gary Player, Ben Hogan and Gene Sarazen – all winners of the U.S. Open, PGA Championship, British Open and Masters Tournament.
From June of 2005 to October 2010 Woods monopolized the number one ranking in the world, setting records for both consecutive weeks and total weeks at the top with 281 and a staggering 623 respectively. Woods has also dominated the TOUR’s money list throughout his career, landing in the top spot a record 10 times, the most recent in 2013, and placing him No. 1 on the career money list with more than $109 million in earnings. He has been a member of seven U.S. Ryder Cup teams (1997, 1999, 2002, 2004, 2006, 2010 and 2012) and eight U.S. Presidents Cup teams (1998, 2000, 2003, 2005, 2007, 2009, 2011 and 2013).
Woods, the winningest player in professional golf over the past 19 years, took a voluntary leave of absence in February after withdrawing from the Farmers Insurance Open with back stiffness. He used the time to address struggles with his short game, vowing to only return when he could be competitive. He did just that earlier this month at the Masters Tournament where he was indeed competitive, tying for 17th. His return at Augusta marked his first four-round tournament of the year and just his third start.
Weekly badges to The Greenbrier Classic, which provide access to the tournament grounds Monday to Sunday, are available from $129 per person. Tournament Badges include tickets to the 2015 Greenbrier Classic Concert Series, featuring Miranda Lambert and Blake Shelton on Friday, July 3 and a second concert to be announced at a later date.
The tournament offers three convenient ways to purchase 2015 badges.
Order online at www.greenbrierclassic.com
Call the tournament ticket office at 304-536-5322
Visit The Greenbrier Classic Shop located in the retail corridor of The Greenbrier
To stay connected with The Greenbrier Classic on social media, follow on Twitter at @GBRClassic (#GreenbrierClassic) and like on Facebook at www.facebook.com/thegreenbrierclassic. For more information about The Greenbrier, please visit: www.greenbrier.com.