January 27, 2009 – White Sulphur Springs, W. Va. – The Greenbrier Sporting Club proved its culinary clout at the 4th Annual Cast Iron Cook-Off held this weekend at the Charleston Marriott Town Center in Charleston, WV. The sporting club conquered the culinary competition, winning Best Use of Locally Grown Protein, Best Menu and Grand Champion overall!
The annual cooking trade fair showcases West Virginia’s culinary talent and attractions and this year’s Cook-Off marked the first appearance by The Greenbrier Sporting Club. The winning sporting club team was comprised of seven participants headed by team captain, Greenbrier Sporting Club Chef de Cuisine, Frank Paris. Paris was joined by Hannah Reid, lead chef at the sporting club’s Summit Lodge, and Greenbrier Sporting Club members; Harry Bell, Stephanie Giatras and guest, Mimi Imbrogno and Rob Stepp and guest, Mike Owens. The sporting club beat out 12 other teams spanning West Virginia, Maryland, Pennsylvania and Washington, D.C., including last year’s champions, West Virginia’s own Bridge Road Bistro and Stone Wall Resort.
“Winning the whole thing was the icing on the cake for the members who participated,” said Frank Paris, Chef de Cuisine, The Greenbrier Sporting Club. “It felt good to reinforce to them, that when they come to dine at the Sporting Club, they are in good hands.”
The sporting club team prepared four courses including an olive oil glazed Lindside trout with bacon and bread dumplings and braised collard greens, an Almost Heaven farm fresh egg with Reeds Mill grits and Reid Farms fingerling potatoes, a coffee dusted Highlander beef tenderloin with Half Mountain Farms Celeriac and white chocolate puree and Reeds Mill Buckwheat Johnny Cakes with Morgan Orchard Apples, cinnamon Mascarpone cream and smoked Maple syrup for the final course. At least one component of each course was cooked in a cast-iron pan. Each course was reviewed by a panel of judges including celebrity judge, Lee Ann Wong formerly of Bravo’s Top Chef, and a selection of local culinary heavyweights.
“I can’t emphasize enough what a great place The Greenbrier Sporting Club is,” says Harry Bell, member at The Greenbrier Sporting Club. “Chefs, Frank and Hannah, deserve so much credit and Harmony Kopelov did a wonderful job with the wines at dinner and training the Marriott servers. We all had a great time and can’t wait until next year!” 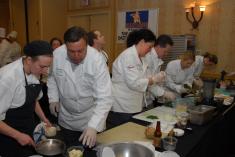 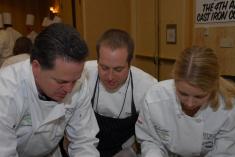 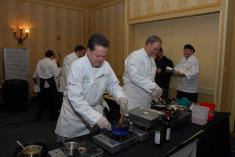 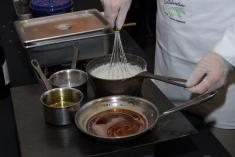 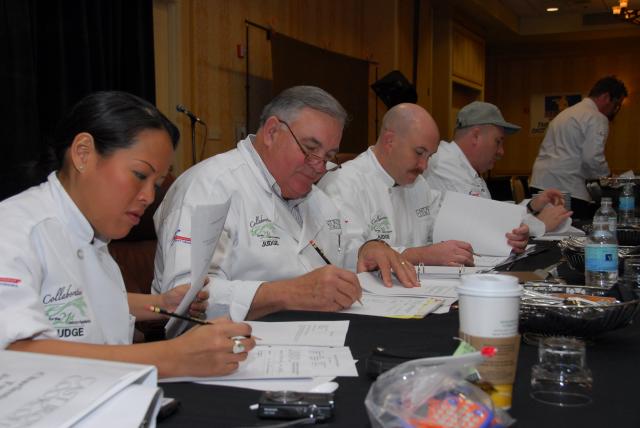